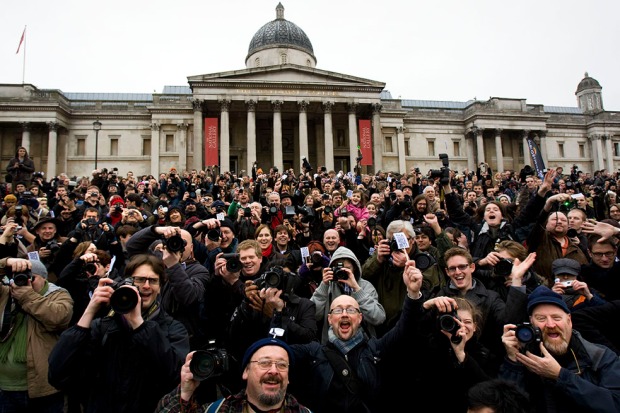 I’m a Photographer Not a Terrorist Mass Gathering. © Jess Hurd/reportdigital.co.uk

Photography has been a hobby or a job for someone since 1827. Now the photographer is not only viewed as suspicious but encouraging perceived anti-social behaviour.

This time the apparent anti-social behavior takes the form of car enthusiasts who like to show off their ‘Supercars’ in and around London, with Knightsbridge being a major attraction. END_OF_DOCUMENT_TOKEN_TO_BE_REPLACED

Phnat is shocked and alarmed to hear that a Brighton-based professional photographer was detained by police for an hour under terrorism laws.

@brightonsnapper Eddie Mitchell of AerialNews was taking photographs of Hove town hall when he approached and questioned by a passing member of police staff. When he declined to give his details on the grounds he was breaking no law, he followed instructions to attend the local police station, where two officers detained him used section 43 of the Terrorism Act, which gives power to stop and search to officers of anyone they “reasonably suspects to be a terrorist”. END_OF_DOCUMENT_TOKEN_TO_BE_REPLACED

Six journalists face 10 years in prison in America, for covering the unrest during the Disrupt J20 protests against the inauguration of President Trump on Friday 20 January in Washington DC.

I’m a Photographer Not a Terrorist (PHNAT) campaign group is outraged by this direct attack on press freedom and calls on President Trump to immediately drop the charges against the #J20six. END_OF_DOCUMENT_TOKEN_TO_BE_REPLACED

I’m a Photographer, Not a Terrorist (PHNAT) is seriously concerned by reports that Police Scotland intends to “seize phones if officers are filmed whilst on duty”, according to the Daily Record.

PHNAT is worried by the apparent conflation of the lawful act of recording police officers with an unrelated offence of obstruction, which can be committed whether using a cameraphone or not. END_OF_DOCUMENT_TOKEN_TO_BE_REPLACED

Sussex Police have apologised to NUJ members that were stopped and searched on when they were travelling to work in Brighton to cover a far right demonstration on Sunday 21 April 2013.

Seven journalists, two of whom are PHNAT organisers, were subjected to a search for offensive weapons under Section 60AA of the Public Order Act and Section 60 of the Terrorism Act, which Sussex police later claimed was a mistake.

The NUJ challenged the police and argued there had been an unlawful use of the legislation to detain and search journalists. END_OF_DOCUMENT_TOKEN_TO_BE_REPLACED

PHNAT are disturbed by the Metropolitan Police’s reaction to a press release from Jason Knauf, the Duke and Duchess of Cambridge’s Communications Secretary.

Kensington Palace has focused on the alleged harassment and surveillance of Prince George and Princess Charlotte by ‘paparazzi photographers,’ a sweeping generalisation of photographers often used by the Royals. END_OF_DOCUMENT_TOKEN_TO_BE_REPLACED

PHNAT
Create a free website or blog at WordPress.com.