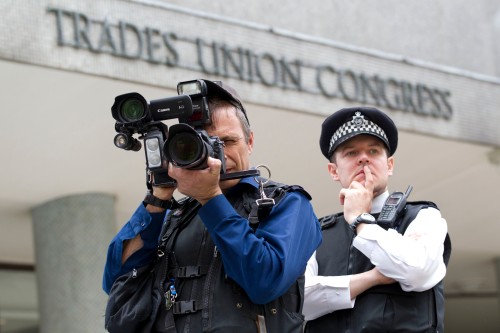 I’m a Photographer Not a Terrorist campaigners are at the centre of a major legal challenge to have their data removed from a police domestic extremist database.
Freelance video-journalist Jason N. Parkinson, Times journalist Jules Mattsson and freelance photographer Jess Hurd have joined with other NUJ members, including campaigning journalist and comedian Mark Thomas, to oppose the surveillance and intimidation they have faced during policing operations in a Bhatt Murphy led legal case.
This is about the freedom to document the world around you without fear of reprisals from the state or private security.
“I’m a Photographer Not a Terrorist” was launched in 2009 a response to the growing numbers of photographers, amateur and professional, who were detained under anti terrorism stop and search powers.
Our campaigning, in conjunction with a European Court legal challenge rendered the use of blanket s44 stop and search powers unlawful.
This was a fantastic achievement and one which everyone involved should be proud.
This legal challenge is key to forcing operational changes at a root and branch level to assure we do not continue to face illegal policing, incursions into press freedom and our civil liberties.
Jules Mattsson:
“Keeping secret files on reporters is not a practice that belongs in a liberal democracy. Whether it’s part of a broader war against journalism by the police or the product of an inept ‘collect it all’ mindset we don’t know, but we’ll find out from how the Met respond to the case.
If they defend the retention of files on the press then we know, for certain, they don’t give a damn about press freedom and cannot be trusted to police the capital without resorting to draconian policies with serious effect on our rights and freedoms.”
Jason Parkinson:
“The disclosure of these files being held on a secret police database and journalists being labelled “domestic extremists” makes one thing very clear – we are not heading towards a police state, we are already in it. The police have behaved like the Stazi, branding members of the press a threat to the state, simply for doing our jobs.”
Jess Hurd:
“Standing up to bullies is never easy, especially when they wear a uniform. We are very fortunate to have the support and backing of our trade union, the National Union of Journalists, and can mount this collective legal challenge to defend all our freedoms”.
How to find out if you are a Domestic Extremist
News Coverage
National Union of Journalists press release – including full statements
Guardian: Police Face Legal Action For Snooping on Journalists
Independent: Comedian Mark Thomas to Sue Met Police Over Snooping
BBC: Journalists Demand Police Destroy Surveillance Files
The Times: Journalists Take Police To Court Over secret Data
Press Gazette: Six Journalists Sue Met Police Over Surveillance…
Belfast Telegraph: Journalists Sue “Snooping” Police
LA Times: British Journalists Slam Police Surveillance in Lawsuit
Fox News: Documents Reveal Years of Police Surveillance of British Journalists
Report Digital: Police Surveillance of Journalists and Activists
Radio 4 Today Programme: Interview With Mark Thomas (At 01.22.00)
Radio New Zealand: British Journalists Spied on – Put on Extremist List
Comment
Press Gazette: Jules Mattsson – My Files Include Sexual Orientation & Family Medical History
Guardian: Jason N. Parkinson: When Police Spy on Journalists Like Me