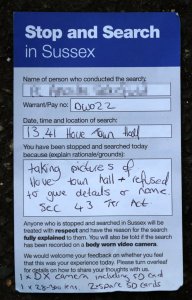 Phnat is shocked and alarmed to hear that a Brighton-based professional photographer was detained by police for an hour under terrorism laws.

@brightonsnapper Eddie Mitchell of AerialNews was taking photographs of Hove town hall when he approached and questioned by a passing member of police staff. When he declined to give his details on the grounds he was breaking no law, he followed instructions to attend the local police station, where two officers detained him used section 43 of the Terrorism Act, which gives power to stop and search to officers of anyone they “reasonably suspects to be a terrorist”.

In a statement Phnat said: “This incident, in which it appears a civilian member of staff stopped and demanded details from a photographer who was going about their lawful business before police officers appear to have conducted a highly irregular search, shows that there are still significant issues with the police when it comes to the rights of photographers, and their legal powers.

The use of Section 43 of the terrorism act, a power requiring reasonable suspicion a person is a terrorist, to detain and search a photographer and view PACE protected journalistic material, is utterly bizarre. Taking photographs of a public building comes nowhere close to establishing “reasonable suspicion” of terrorism.

To make matters worse for Sussex police, which has faced successful legal action over searching journalists before, their press office and now chief constable have decided to give their unquestioning support to the employees involved. This raises significant questions about the impartiality of any internal complaint process that may follow.

We hope Sussex Police will reflect on the law and national guidance and apologise to the photographer involved, retrain these staff and educate the members of senior management responsible for defending it.

Members of PHNAT’s committee are in touch with the photographer involved.”

My Tweets
Join 3,493 other subscribers