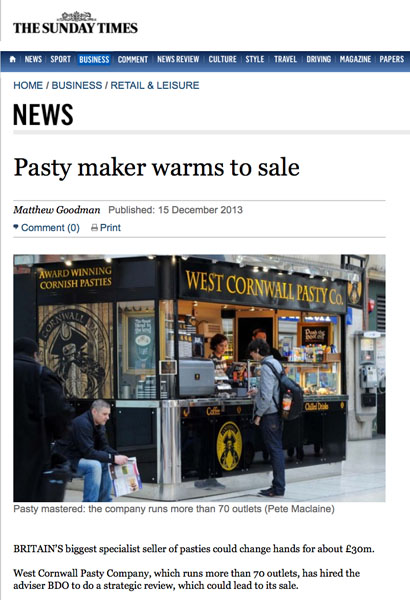 A usage of one picture in question, first shot to cover the ‘pasty tax’ but used editorially since via Alamy. © Pete Maclaine.

This morning a number of photographers who contribute to the picture library Alamy were informed that various images they shot in and around UK train and even tube stations were to be removed from their library following complaints from Network Rail.

SEE UPDATES AT THE BOTTOM – IMAGES ARE BEING REINSTATED

The I’m a Photographer Not a Terrorist campaign is deeply worried by this and has been in contact with both Network Rail and Alamy to raise concerns. PHNAT has seen examples ranging from recent news images to a station crowd shot from 1972 – with emails to photographers saying they were “violating their exclusive intellectual property rights.”

Photographers who challenged this have been met with mixed responses, the 1972 photograph (long before Network Rail existed) by Homer Sykes has been restored by Alamy while other contemporary news images – which had been published in the UK press without issue – have not been.

Another such removed image was, according to the photographer John Heseltine: “a shot from Camley Street in 1984 with the nature reserve under construction in the foreground, the Goods Way gasometers in the middle distance and the tower of St Pancras on the horizon nearly a mile away. The land was once the property of the Midland Railway but the land was ceded by Camden Borough Council to The London Wildlife Trust the year I made the image”. He is appealing the takedown to Alamy and you can see the photo in question second to last here.

Posters on Alamy’s member forum described various images removed as including “an electricity danger sign”, pictures of stations “taken from a nearby public road” and even one in another country “at the platform at the Gare du Nord Station in Paris”.

Alamy told us “we’re in communication with Network Rail and we’re both seeking further legal advice and we’ll be in touch with our contributors as soon as we know more.”

Network Rail maintain their position that news and current affairs images require their permission to shoot, but would not incur a fee, and that for hobbyists ‘you can take photographs at stations provided you do not sell them.”

However the cull appears to have been blind to even their own permissions, with one poster to Alamy’s member forum saying: “I had permission to shoot some of the deleted material from a shoot at London Bridge for a book project. I’d paid a £200 fee and signed a waiver although, so far I haven’t located my copy to check the wording. It’s probably not worth turning my office upside down to find it but I do wish I’d been asked beforehand, rather than immediately kowtowing to the letter from Network Rail.”

There may be hope with the apparently indiscriminate takedown notices issued to Alamy by Network Rail . See statement at the bottom for good news.

PHNAT is concerned by the blanket approach taken by Network Rail in requesting bulk takedowns of images across (and even beyond) their jurisdiction regardless of circumstances, permission, purpose, public interest or licensing restrictions.

@nembrotha @j_edwards_photo @networkrail I had about 40 removed. Some nice ones among them

We would like to see Alamy reverse these en masse takedowns entirely and insist on specific, case-by-case requests from Network Rail – a public sector body – before removing huge swathes of visual history and reporting.

Removing works on intellectual property grounds is something that should be done with great care and attention to detail without blindly trampling across press freedom and the right to photograph.

In the case of Network Rail we hope they will reverse their requests until a proper and thorough assessment can be made of the merits of each individual claim. We would like to see Network Rail consult with photographers to clarify their policy and position in the future, particularly with a view to reforming their prior consent requirement for news.

Private spaces like the GLA-owned Trafalgar Square and Parliament Square have reached agreements with the industry to allow ‘pre-authorised’ media access for accredited press card holders. Another example is the American Amtrak train operator who recommend previous contact but say “members of the news media are entitled to the same access for photography purposes as the general public” and accept that “it is understood that during breaking news events advance contact with Amtrak’s Media Relations Office may not be possible.”

When covering spot news stories Network Rail’s policy to insist on prior permission is often unworkable for press photographers and videographers (take this recent example). We would encourage them to adopt a similar position to the GLA and Amtrak for accredited press, having a default right to record in public areas. This would help avoid many issues with the capturing and publication of news images in the future and clarify the position to photographers of licensing their editorial work.

Members of the media being unable to document news stories in parts of Britain’s major public infrastructure or having their work censored and removed at a later date is a threat to freedom of the press and the right to record. We would compliment Network Rail on their clear position for amateurs that they are allowed to photograph on their property but encourage them to think again about the rights of editorial and press photographers now and in the future.

We hope to update this post with further responses from those involved and hope a dialogue is possible between the photographic community and Network Rail.

Network Rail have released this statement after being contacted by PHNAT:

“As a public company funded by fare payers and taxpayers part of our responsibility is to maximise revenue from railway property, of which we are custodian.
“That means that filming and photographs taken for commercial reasons will attract a fee, whereas the content gathered for news and editorial reasons will not.
“Permission must be sought for all such activity so we can work to reduce the cost of running the railway and thus lighten the burden to both fare payers and taxpayers.
“We understand that a photograph agency with both a commercial and editorial branch were contacted by Network Rail and asked to take down photographs taken in train stations if they were to be sold on for commercial purposes. We have since gone back to the agency to clarify that the pictures may remain on the site as long as they are licenced for news and current affairs purposes only.  There has been no change in our policy.”
It is still unclear how editorial images were taken down. Network Rail  say their policy has not changed and editorial images should not be included, how the images removed were chosen remains unknown.
PHNAT urges contributors that have had editorial, news or archival images removed to contact Alamy and dispute the take-down. You can tweet them at @Alamy & @AlamyNews and Network Rail at @networkrail & @networkrailpr with your views.
UPDATE 2: Victory! Alamy have emailed contributors and posted to their forum:

“We wrote to you yesterday about images taken at the Network Rail owned stations.
Since then Network Rail have sought legal advice and they have changed their opinion. They have said they’re fine to sell editorially.
We’ll put these all back on sale with an editorial only restriction.
We have also advised Network Rail to update their photography policy to be in line with this.”